The term „Zwicken“ (lasting) comes from the early days of shoe making, because the small nails used for this purpose are also called „Heftzwecken“ (tacks). It is one of the most important operations in shoe manufacturing. And so the lasters always also took a special role, because from the lasting depends essentially the appearance of the finished shoe, its fit and thus the comfort of wearing.

In the lasting room, the upper is pulled tightly over the shoe last with pliers and fastened to the insole. Before the development of the lasting machine, this operation was performed by hand and with special pliers, with the laster holding the nails ready between the lips. The „Zwickerdenkmal“ on the Lorenz-Wingerter-Platz shows such a laster at work.

The lasting machine seen here fastened the upper with small nails (tacks), which were automatically fed by the machine. Today, the upper is no longer fastened to the insole with tacks, but usually with glue. 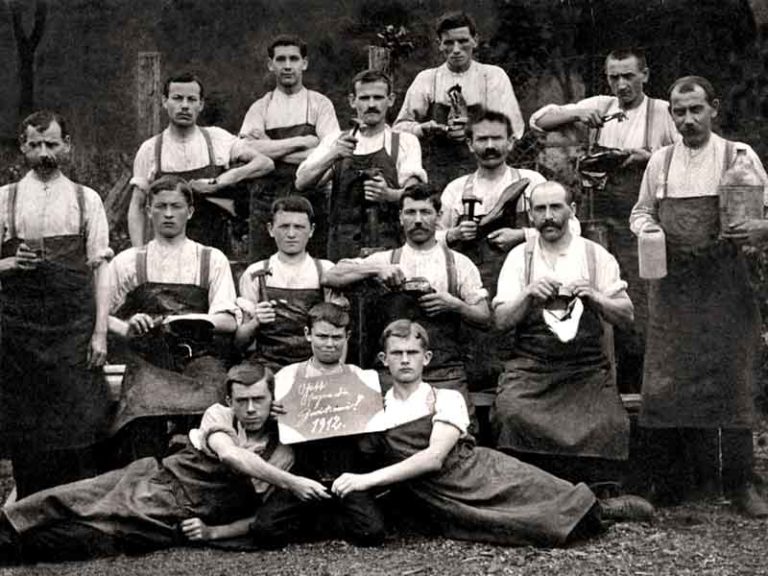 „God bless the lasters“ is written on the sign held up to the camera by the lasters at the Josef Keiser shoe factory in 1912.

On to the next stops… | Vers les prochaines stations…

Since not every station is equipped with a QR code, this navigation points to the next station with a QR code. On the way there, you will automatically pass more information boards and displays. Just keep your eyes open.